The people had to queue up in a line and the Estate broker went trhough the line to sell to each person.

Well guys i tell you , i felt horrible.

It was more worse then in Real-Life were everyone is scared dont to get a piece of the cake.

The other problem was that so many people were in the area that it was so laggy that my Chat had Lags !!!! 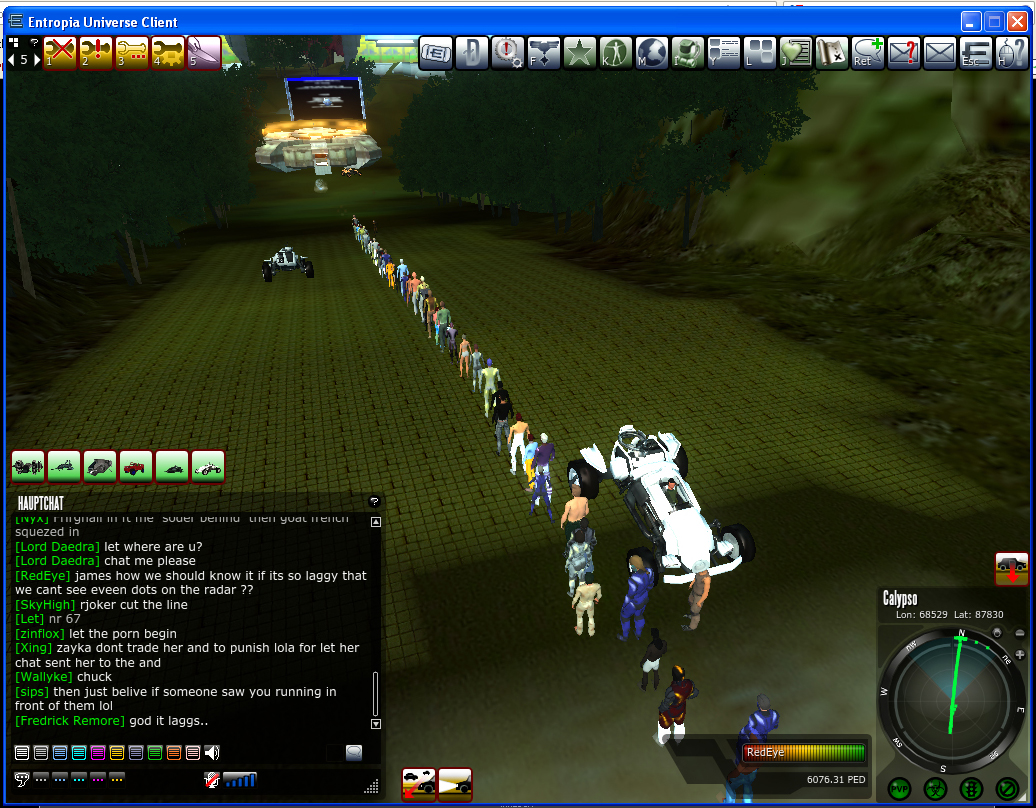 The other thing is , MA did this with the reason that EVERYONE has a chance to get deed’s.

The smelly point is that around 50% of the people in the queue sold their deeds straith AFTER THEY BOUGHT THEM FROM THE BROKER.

During the broker went throught the line they were spamming in the trade channel that they sell their deed’s !!!

Sorry but in my eyes its badly rough , that resellers cant wait until the big sale from MA is done after the 11th of Novemeber.

They buy 5 deeds and sell them straith on , go on the next day there to have more to resell. The poor guys are theese who had problems with their deposit-transfers or just no time to be online at this time.

Today aswell the late-comers got a chance to get some , after the 500 deeds were sold MA, decided to finish the whole queue so that everyone got his deeds who was in Fort Ithaca this afternoon.

OK SO FAR TO THE SALES.

Now my suggestions how to improove this and make it really fair for EVERYONE !!!

Instead of selling the Land Deed’s P2P or per Auction , it would be better that established players get RIGHTS to buy SHARES in kind of a card or voucher !! this is a common procedure in the RL-economy.

What is established ? …. pretty easy ! You can say everyone who degreed the mentoring has invested and is playing a time where u can say, its not just a twice avatar (against ToU) or a player who not really like the game.

The good thing is The “RIGHTS to BUY” can split up by as many ppl who exist in EU, so the right to buy 1 Deed can be split in 10 vouchers , and u need 10 to swap in a Deed.

Who is authorized for the “Rights on Shares” ???

All approved players in EU OR this who are born on Calypso and approved aktive players (mentoring).

Don’t worry if not , RT people got the witches broom which they could sell for 200 ped and the people from calypso just got a GAY-TORCH !!! :0

So then it would be sometimes little more equal if something new is introduced were only people from different planets have the benefits.

-The “Rights on Shares” can be traded but not put into TT.

-After 2 – 4 weeks were the voucher not have been traded into CLD’s , the voucher will be deleted and the rest of the CLD’s will be just put on auction from the Estate-Broker (who didnt care, cant complain !!).

So then everyone and not only the long playing people or the people with massive ped are the ONLY one who take benefits like it is NOW !!! ALL authorized players would take benefit of this CLD – Sales.

Additional it would be ways easier for other REAL-Share-Holders to get them because they dont have so many problems with the Resellers anymore.

If Anyone doesnt like to buy deed and this are some , then they have at least the chance to sell their voucher for “Right on Shares” , for let it be 5 ped or maybe 3 ped (negotiable) to anyone who really want to have a Deed.

At This Moment the People who has the biggest Benefit are the Reseller’s who have enough cash to do this “Big-Deals”. This would change if the rights on shares would be necessary to get a Deed who is new introduced in the “open market”.

Well thats my suggestion for the future!!

Please share this link with ALL Entropians and maybe if anyone has connections… aswell with MA.