So , now i wanna say aswell something to it

Did anyone notice what this MA announcement + Maxim Deed Sale + Arkadian VU changes made with our ingame economy ?

So as Miner i just give u a small over view :

the other thing in cuase of dropping general mu i had to stop now mining for a while.
So i try to trade a little and need to make now the bad experience………..
no one buys anything lie before……….
have quite different stuff for sale and auction is like dead.
except from a few RK-5 nothing sold since days.

When this stupid deed sales will finally end ?
when the economy is finnaly broken ?

Sadly i noticed aswell that many which “bigger” bankrolls , selling out and doing BIG withdrawls……..

Hmmm i think its time to focus a little what is going on here.
this big changes combined with the big extraction of ingame liquidity and the not announcing of big changes which fucked the arkadian economy (decreasing of demand on arkadian weapons) which brought many people in a pretty bad situation.
it broke down the life ingame…..
see just half as many people regularly online as in november and….. we have winter on north globe……

Really MA , last VU was a nice roundhouse kick against the player base.
And with player base i dont mean sweaters…….

And Maxim , i completely agree with the way how u sell your deeds , it was time to kick the resllers a little in their ass. The only reason why Deeds went so high were the resellers and not the huge demand (which isnt that big that many ppl bough [see current mu on deeds : 1205 AVERAGE after around 10 days of selling])

but Maxim…maybe its time to make a little break from the sales that the ingame economy can recover and eco is increasing again.
Miners sitting on their ores and hunter aswell on big parts of their loots.
Maybe it good to sell just for 1 day 500-1000 deeds for lets say 1210 on BO (its more then recent averge mu) and then make a break from selling coz the people dont play anymore……
and we need to wait 2-4 weeks more in this situation until we can have our economy back ? :0

serioulsy , i think its time for me to log off next 2 month XD

nothing to do here i just wait that anything sells on auction…. or mu’s on ores at least partly go up.
but…nothing happens ^^

To arkadian Dev Team i wanna say in the end :

GZ u really fucked with weapon changes your own planet

waiting for rebalancing now that its worth for miners to go back there….

Weapon changes made arkadian weapon like Noob guns for ubers , no demand for med skiled people.
Dmg-output compared to skill demand is so a shit on them now

new calypsian weapons which are ways more eco,lower in mu and need way less skills are more then a option here.
Ark weapon crafter stopped their business ->
ARK Miner went to -> RT , sitting now on RT
double amount of miner in average on RT -> MU on Alt and Niks dropped badly down to a limit where its not usefull to go with big amps anymore and Crafter need ways longer time to get Rid of K-PED TT in amps/weapons and other gear -> less demand on ores -> economy decreasing -> MU on ores drops more and more -> crafter and miner logging off and pray for better times !

u see how one planet influences the other…….

Additional i noticed that conspicious MANY people preparing ,in cause of different reasons which are partly ingame reasons like last VU, Massive withdraws.

So WTF is going on at this moment in Entropia ??

If  anyone can lead this to Ark-Dev team would be nice, im not bothered to register forum there.

for the moment im pretty done with this planet….used to be most liked in EU…things changing…..sometimes in a really sad way.

I hope to get a Feedback to this Post , i will Add your comment as long it has to do with this thread and has not any Spam-Sale-Link included…….. 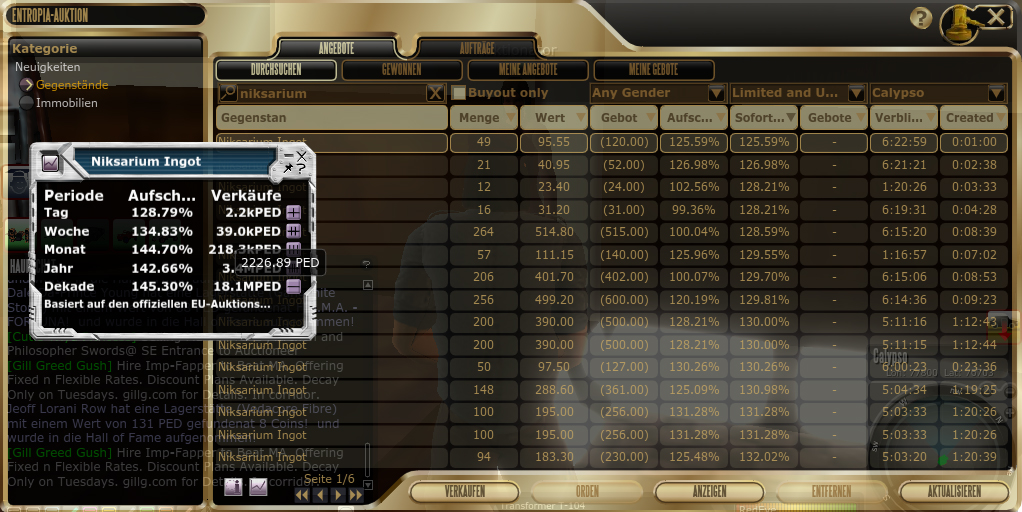