The Name is aftertimediaries or ATD. The scenery is in the year 7885 on planet Earth.

Plenty of big natural disasters have changed the face of Earth and all continents melted down to a single Pangea. There were only a few survivors, YOU will be one of them ?? 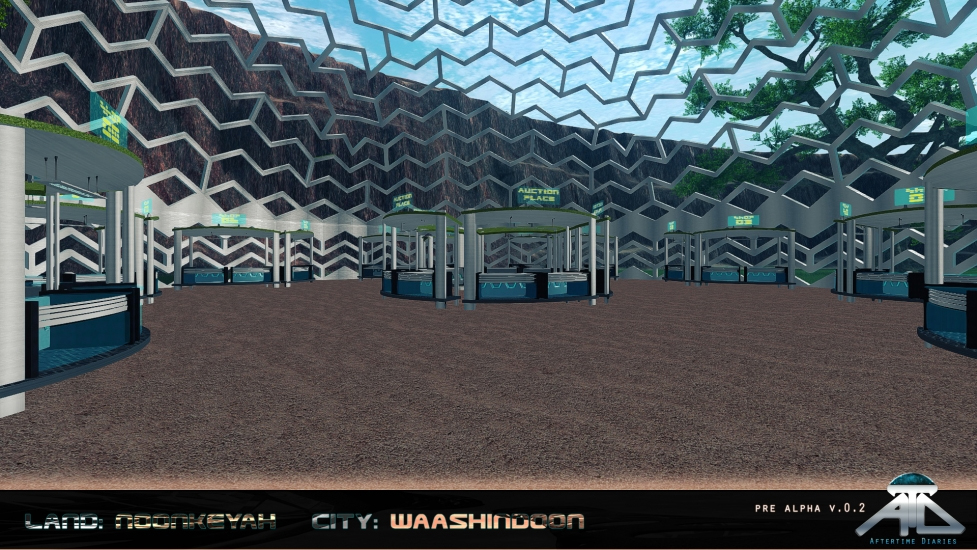 The developers said the Alpha and maybe beta – phase will start end of 2013.

They show us a large gallery of pictures which look really nice.

The system will be similar to Entropia Universe.

They still working on the Algorhytm , return will be 90% or 95% Average.

But some things should be different to Entropia. At least we can read out that promise.

Farming with agriculture and animals should be possible but first in the open realease.

Factories and refineries should exist to be rented. It should be possible to hire other players to work in this refineries that you make aswell profit as long you are not able to play.

Mining will be UNDER THE EARTH in caves or dungeons which exist everywhere.

Stalls or booth’s will exist on each market place but not for sale , they will be rented.

Auction will exist indeed but no one knows yet if it will be a global auction or more like in eve online seperate markets (which i would prefer).

the 3 known main profession will exist ( hunting, mining and crafting ) and some more in cause of the new options which has been promised in this game.

The company will have aswell “shares” which can be owned by investors (mostly player we will hope).

Financed it will be via a “crowd-funding” program.

Players which join during the alpha or beta-phase have to pay a entrance fee of at least 50$, but you can pay aswell 10.000$ or more if you like.

For this the developer promise , the crowd funder will get some uniquie special items which wont be available after open release , inclusive shares and virtual piece of  “land” and ingame currency.

I was browsing the forum on their homepage and i was checking aswell other sources in the internet.

I read a blog from another entropian and I was pretty shocked how negative this guy wrote about this new game before he saw anything real then some pictured in the gallery.

I could really read out a kind of “fear” that this game could become MindArk’s worse nightmare and it wil be maybe the end of Entropia.

Let’s say if i have invested a large amount of money , yes this could be really a reason to denounce the pure presentation of a new game.

Everone knows about the financial situation of MindArk and that a big disaster or competition indeed could cause quite big problems for this company.

The crowd funding system is not just a nice idea. We can see on Chris Roberts (WingCommander,Freelancer), how successfull this way of financing the development of new idea can be.

In “Star Citizen” a new Sci-Fi-MMO (announced for 2015-2016) people buying a hangar included some spaceships for a couple of hundred bucks just to walk around and waiting the day comes the hangar doors will open.

But in ATD you can already in the alpha or beta phase play with for a smaller amount of the playing-costs, inclusive items which wont be able to get anymore after launch.

ATD is promising really a lot of things which are often requested in Entropia.

Farming isnt tamming but in the end more usefull and from a economic side more interesting then tamming.

the idea with the refineries and factories is what people looking for, which are sick to stick always to the same things like hunting or mining. there not enough variety in entropia anymore.

people know , who are today the big guys ? The guys who play longer then me ^^

Aftertimedaries is a completely new world with new mechanics and new secrets, new oppurtunities……..IF the Dev’s can convert their promises.

it could be the thing all desperate entropians are looking for……….

Me for my part, im very curious and im awating more info to decide if i will join the crowd funding programm.

hope you liked it and gl @all